We arrived at the Cherry county ranch after a drive south from Valentine. Myself and Gordon Warrick were on an outing to get pictures of some classic, heritage features horses.


The afternoon started with a real treat. Barb made a wonderful dinner of meat loaf, lettuce salad topped with bits of bacon, a zucchini salad, warm biscuits and mashed potatoes.


Then to top it off, we got homemade apple pie topped with ice cream. What a grand lunchtime meal. Table talk included industrial wind turbine activity, the repulsive powerline and butterflies. 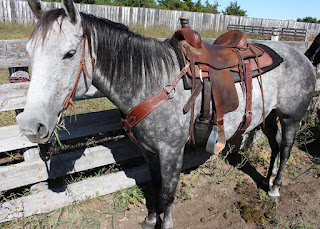 Having been here previously the meal continued to the high standards of cattle country culinary cooking.


A bit before 2 p.m. we went to work. A portion of the Foundation Quarter Horses needed to get their picture taken. They had been gathered earlier and were ready in a pen. These are horses with a bloodline based upon heritage of the early days of quarter horses. This herd has a bloodline that is about more than 97% representative as having been bred to improve the bloodline since the mid 1990s.


It was an unusually fine day. The sky was clear. There was no wind. The temperature was also quite nice.


One horse at a time was separated and then moved around in a separate pen in order to get a suitable picture, with Gordon and Mary moving them around to get a suitable perspective. Dan and Leroy were keeping track of details. Each of the horses have a pedigree and details indicated thereon were used to establish the identity of each horse.


There were a dozen horses considered. Records kept included its type such as gelding, etc., along with color and when born.


Things went well as a team getting the horse in and getting a “pose-like” stance.

Afterwards Gordon and I ventured westward to try to find a herd stallion named Mr. Poco Blakburn. He was wandering amidst the hills and was not seen.


Upon returning to the barn and stock pens, further consideration was being given to the identification details of the horses that got their picture taken. Eventually this task was finished and it was time to move the horses back to the pasture. Three riders including Leroy, Mary and Mark mounted up. The ranch dogs, including Daisy, ended their respite and also came along.


This move was considered as the sun light was right and the horses would be suitably heading southward so they would be moving forward and that would facilitate picture taking.


There were images captured as the stock left the pen, moved through a meadow and then across the North Loup River. Some great pictures were taken as the small herd crossed the river.


Us two photographers then ventured westward again but could still not find the herd stallion in its pasture.


It was a beautiful day with beautiful horses in a beautiful country with great hosts. What a special and unique start for the autumn season. 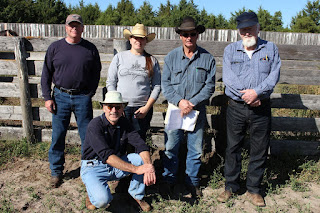 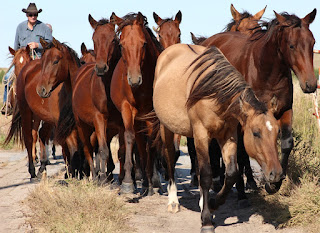 Community Pride at a Valentine Neighborhood

With autumn ascending the colors of the changing season are spectacular. Sumac is getting more red daily and some tree leaves are descending. Fall bird migrants are arriving and subtle amidst the land habitats.


This transition is obvious in subtle ways at a Valentine neighborhood that is looking so fine at this time of seasonal change.


After many months of recognizing Yard of the Month in Lincoln while residing there, features to be appreciated are cognizant and are very obvious now along Lake Shore Drive, along the north side of the Mill Pond.


Lawns are well mown, regularly. There are many spaces where multiple sorts of flowers colorfully bloom and which have been carefully tended for months and thrive because of the ample rains and splendid sun. It took some effort to get the results which are now so obvious. The floral variety is amazing. Women and men created a wonderful setting for their homescapes that look simply suberb.


Various flags fly with pride, including those expressing Husker pride on game days. There is nearly no trash.


Even the two fire hydrants along the drive are freshly painted in a newly indicated red and are the best looking hydrants in the city. They convey a vivid red coloration amidst the great green of lawns. Horse pen fencing has been recently painted newly white at the west end of the drive. Even the city of Valentine has helped by repairing drainways.


The multiple deer and wild turkey are indifferent, but this place is their haven. They ignore the flapping flags and occasional misguided traffic as they go about their daily routine. Birds enjoy the available seed. Turkey Vultures - supreme aerialists - always soar above during this season.


People along the drive obviously care and the result is obvious! It took lots of work to get things to completion as they are now.


Now if the perp that throws beer cans out of their truck while traversing the drive would stop that miscreant behavior, all would be good. Owners of walking dogs also need to be good and clean up after their pets!

It was too cool early in a day. There were winds that added an unappreciated chill. And it was too cloudy to be any nice of a pleasant time outdoors.


This was the weather that outdoor enthusiasts dealt with at the public lands day event at the wilderness outlook at the western extent of Fort Niobrara NWR during the morning of Saturday, September, 28th.


To start the time of appreciation, birders listened at the outlook over the beautiful Niobrara River valley where crows were distinct so vociferous. Then we walked about as led by a some so-called local bird expert. Some bird lore of the refuge was shared as we all wandered across the prairie of the northern extent of the refuge, which is one of the oldest such public places in the U.S.A.


There were 14 avian species identified according to the indicative list. It started with a downy woodpecker. Flickers were very vocal as a single turkey vulture floated above the landscape to the west. Two transitory Canada goose flew overhead and were quite notable as they are the signatory species for the federal agency caring for this public land.


One of the best occurrences were one or two very small red-breasted nuthatch vocal among the pines. This arboreal habitat is their home and they indicated this reality on another one of their days in the wild. Four so subtly colored birds on a tree snag finally became identified as pine siskins. A regular towhee of the regularly occurring spotted sort was in the river valley, adding its voice to the morning scene. When a red-tailed hawk flew along overhead, it must have been obviously looking for cottontail rabbits, as two were seen hopping around along our walk route. Other regulars were black-capped chickadees, the blue jay and a very nice flock of goldfinch.


Missing on the list were the LBJs. Those would be the little brown jobs, most notably autumnal sparrows. They would have been lurking amidst the ample growth of prairie grasses but since they prefer to dive deep in the vegetation or lurk behind some shrub growth, their identify was very much anonymous though very present as noticed elsewhere in the Valentine vicinity.


Then on this Saturday, a volunteer of the National Park Service described identifying features of monarch butterflies and their nature. Especially notable were facts about how this species strives to survive and what many people do and can do locally to assist. The reality is very subtle but distinctive as it was shown and explained.


Some errant rain drops ended the event enjoyed by a few visitors to a natural place for which they were notably appreciative.


This event was sponsored by the National Park Service and Niobrara Council of Valentine.

All original stories, photographs, video and images are Copyright 2007-2020 James E. Ducey (sandhills.jim.ducey [at] gmail (dot) com), Nebraska. All international rights reserved for original content, including all presented information, unless otherwise attributed. No portion of this material may be copied or replicated without explicit written permission. Wildbirds Broadcasting is a service mark owned by James E. Ducey.

If you would have a story idea to share, or a topical story to contribute, please send me an email. Or if you would like to make a comment, the email option is always available.